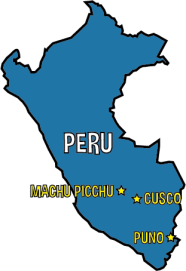 An early morning boat ride whisked me out to the floating islands of the Uros on the Peruvian side of Lake Titicaca. This is a group of people who were sick of fighting with other people on the mainland, so they made their permanent home in the middle of the lake on artificial islands they made out of plants. The woman in the photo is demonstrating how this works: a large layer of floating roots tied together, followed by reeds, then houses go on top. The plants are constantly decomposing, so there is constant work to maintain and upkeep the islands and structures.

Day 1: We left before the sun rose and the first day was a relatively easy wander along the Willkamayu River (also known as the Urubamba). To the Incas, this river was the earthly version of the Milky Way and reflected the duality between the heavens and the land. After passing the agricultural city of Patallacata, we camped in the middle of some gorgeous mountains.

start of the trail over the Willkamayu River, Patallacta, view from evening campsite

Day 2: This was a shock to the system with a never ending set of stairs towards Dead Woman’s Pass, named because of the shape of the mountain. I’d been at pretty high elevation for the last two weeks, but I was still moving slowly, especially towards the top. There’s a lot of ups and a lot of downs, but the scenery and company was fantastic.

on the way to the pass, celebrating making it to the top, the view down from the pass

Day 3: After waking up at the break of dawn, we headed out for a full day of ruins. In the morning we stopped at the beautiful temple of Sayamarka.

cloudy view from Sayamarka window, chillin’ in the old temple, flowers growing from a crack

Although the rain picked up after lunch, we were able to visit more Inca sights after lunch. Their splendor and size got grander as we got closer to Machu Picchu. The current theory is that Machu Picchu was a country estate designed for the Inca ruler Pachacuti. When he left Cusco, he would take up residence in this citadel. As his entourage moved along the Inca Trail, there would have been teenage sacrifices (some self-chosen and some chosen by parents) and celebrations in his honor. For this reason, there is a sacrifice table at one of these temples and the blood would run from this spot higher up to the temples at the bottom of the mountain through a series of canals.

Our guide gave us a special evening tour of the beautiful ruins of Wiñay Wayna. Inside of this temple there would have been an Inca mummy that continued to dispense advice and wisdom even after death.

Day 4: One last ridiculously early morning and we were finally on our way to Machu Picchu.  The clouds were out as soon as we started walking, so there were no beautiful views. The spectacular tourist shot that everyone takes was a giant cloud when we went by. After dropping our bags off, we went off on a tour of the ruins. Machu Picchu has a little bit of everything: deluxe bedrooms, temples, vast terraced agricultural lands, educational spaces, intensive plumbing, and astronomical observatories. I had gotten a ticket to climb Huayna Picchu, but after 4 days of non-stop hiking, I only made it up the slightly smaller hill nearby to capture a photo of its incredible beauty.

Machu Picchu in the clouds

Machu Picchu, me and our guide, view from nearby hill

By the way, if you’re looking for a company to hike the Inca Trail with I highly reccommend Evolution Treks Peru. They’ve got women porters, excellent guides, and treat their workers extremely well.

I ate a huge meal of Chifa (Peruvian-Chinese food served with limes and ají) and promptly fell asleep at 8:00pm. When I woke up, my calves were a tingling mess of soreness, but I endeavored to get moving regardless. I wandered through some museums and markets, but my highlight was going to the family-run Cusco Planetarium. I learned all about the black llama that can be seen in the Milky Way. Its eye is one of the pointer stars to the Southern Cross. In addition, I found out that Incas most likely used the Pleiades to determine whether or not they were going to have an El Niño year. When they were bright and clear they would have a regular year, but when they were blurry and faded, they would have an El Niño year. This has do with the arrangements of winds, weather, cloud cover, and geography (scientific article in Nature).

I also spent a day exploring some ruins near to Cusco known as Inkilltambo, the Garden Hostel. There were beautiful terraces for agriculture, a jail, and a place for storing grain. The Inca empire mastered agriculture in a very difficult and mountainous terrain. Even the Spanish recorded that no one was hungry in the Inca Empire. (This can probably be attributed to the m’ita system of forced labor, which has some elements of public service and some elements of straight-up oppression).

This offer is still valid. 🙂 If you want a postcard from overseas, fill out this postcard form! At some point this school year, I will send you a postcard from somewhere outside the United States. I can’t guarantee it will be delivered, but I will send it. The first set of postcards has already departed Peru!

Birds are way less flighty when you're on a paddleboard. Definitely working it for the camera. #sausalito #standuppaddle #getoutside
Pelicans over the ocean. #halfmoonbay #getoutside
SUPs and sloughs with my fellow water adventurer @pie_r_squared #standuppaddle #getoutside
This weekend was a bit jarring. 🤣🤣🤣
20 years after we started training for Peace Corps in Zimbabwe. We went through a lot in our training: 9/11, a murdered volunteer, and an evacuation. I am so grateful that all these years later, it feels like no time had passed. Old friends are the best. #zim13 #peacecorps #rpcv
Even though @turkmanor was my first friend in our complex and we hang out at each other's houses all the time and we've been play buddies for years, I have almost no photos of the two of us. I'm so grateful for his friendship and support and putting up with all my random stories. Also go see Song of Summer or get a video pass and watch it at home. We both loved it. #sfplayhouse #songofsummer
Loading Comments...
%d bloggers like this: