Snorkeling the Great Barrier Reef has been on my wish list for a really, really long time, so I flew up to Port Douglas. Inside most corals, there are tiny plankton (a type of dinoflagellate) that live within the coral and give them their color. The years 2016 and 2017 were two really hot years which caused massive amounts of coral bleaching, roughly half of the reef. During a bleaching event, the plankton actually leave the coral when it gets too warm. These tiny plankton do photosynthesis which give sugars to the coral and without them, they slowly starve. If the water temperature cools down, the corals can accept these plankton back. Right now, the Great Barrier Reef seems to be in a stable holding pattern, although with global warming this is only a temporary situation. At the moment there’s some beautiful coral and fish still to seen, although there’s been a lot of devastation as well.

One of the most incredible sights in the Great Barrier Reef are the giant clams. I’d seen a couple big ones back in the Gulf of Tadjoura in Djibouti, but these are HUGE, over a meter across. I’ve previously only seen fossilized ones this big, so I thought they were extinct. But no, they are still living here on earth and they come in the most incredible variety of colors. 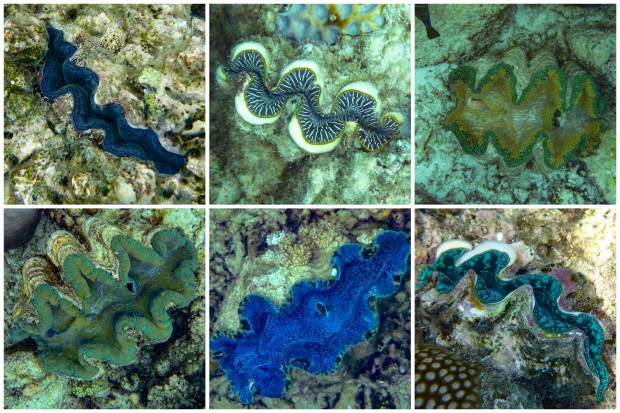 giant clams – all of these are about 3 ft across

There were lots of fish. Here’s just a brief view of some that live in the reef. 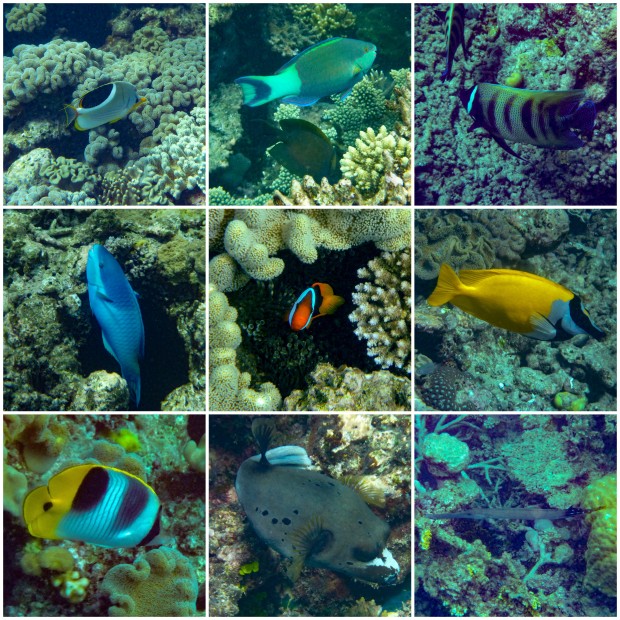 And, of course, the corals! I hadn’t seen blue corals in a long time, and this was a huge boulder of them, which made me really happy. 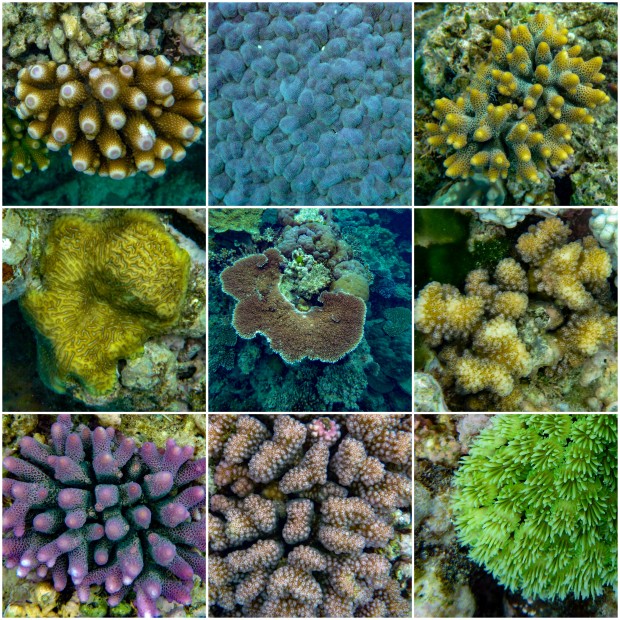 I am at the point in my snorkeling career where I get sidetracked by many organisms, especially weird invertebrates. In the top row of the photo below are three different types of tunicates. These belong to the phylum Chordata because they have a notochord, basically the beginnings of a spinal cord. Chordata is the same phylum humans belong to, which makes these our closest evolutionary relatives that don’t have a backbone. They are also known as sea squirts and, in the Bay Area, we have a species that look like little grapes that are commonly found on the side of piers.

Also, feather stars are cool. They are a type of sea star, but they can sort of swim. One of best videos of a feather star in action was captured in Thailand. 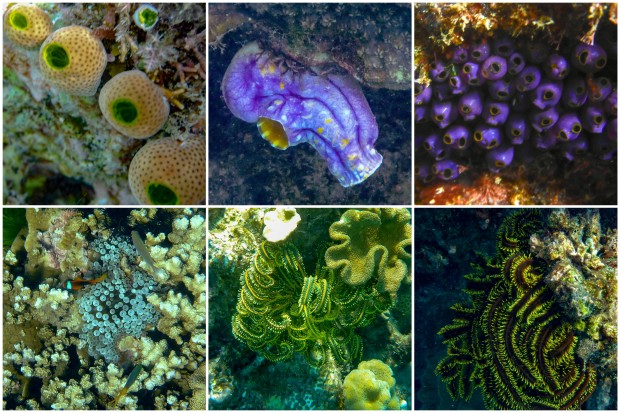 After my day of reef snorkeling, I  stopped in a wildlife sanctuary so that I could take a photo with a koala, and to feed some kangaroos.

Next up was Uluru, the giant rock in the center of Australia that white folks called Ayer’s Rock. It is made of sandstone that was uplifted around 350 million years ago. This rock was used for spiritual practices by the Aṉangu people and for many years they asked outsiders not to climb their sacred rock, but tourists continued to do so. Finally, this October, the rock will officially be off limits. There are traditional stories that relate to certain marks and features of the rock. It’s a beautiful place, even though there are flies everywhere during the hot daylight hours.

At night, there was a special light installation by Bruce Munro that includes over 50,000 individual lights. It seemed a little pricey, but I really enjoyed wandering around in the ever changing colors. On the drive between Uluru and Alice Springs, our group stopped and did a lovely hike along the rim of Kings Canyon. 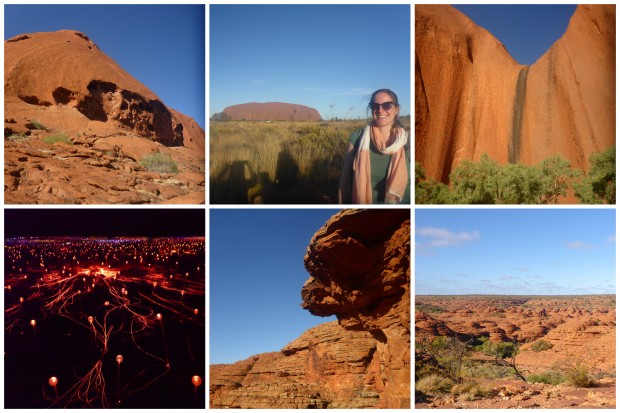 Near Uluru is another set of huge rocks called Kata Tjuṯa formed during the same geologic event as Uluru. This also has spiritual significance but gets far less visitors. I thought that some of the views were a bit nicer though and the hike was lovely.

My first day was spent doing laundry, booking the rest of my accommodations and activities and basically being a super internet junkie. I needed a day off from traveling, especially since New Zealand had been a bit non-stop with all of the driving. Since I was staying in the Melbourne CBD (Central Business District) which is conveniently located right next to Chinatown, I did go out and eat some amazing food. 🙂

One of my first stops was the Melbourne Museum. There were tons of taxidermied animals, a special exhibit on the biota of our guts, and an introduction to indigenous culture.

One of the most iconic buildings in Melbourne is the Victoria State Library. Built in 1854, it’s Australia’s oldest library and one of the first free libraries in the world. As you can see, it’s also very pretty.

corrals in atrium, beautiful flowers in an old naturalist book, the dome

I took a special trip down to St. Kilda Pier in order to see the tiniest penguins in the world. These little blue penguins are only found in Australia and New Zealand. They are plentiful, but hang out only in certain areas. These penguins swim out before sunrise and stay until after sunset eating fish in the ocean. They come back every evening to sleep in the rocks and that’s when the tourists like me come by to see them.

All the reviews of Melbourne online said it was important to see a game at the iconic Melbourne Cricket Ground. There was no cricket game happening while I was around, so I went to see an Australian football game instead. I read an introduction to the game online and the nice family next to me helped explain things. It’s very different from American football and rugby. Moving the ball downfield is mostly done through kicking and punching the ball forward to teammates. Scoring is accomplished by kicking the ball between posts, with the middle posts resulting in six points and the side posts adding only one point). Side note: these players do not skip leg days, their thighs, which are stuffed into tiny shorts, are bigger than most small trees.

One of the quirkiest parts of the sport is that because of the way the league was created, there are several teams from the Melbourne area and less teams located in other states. The match I saw was between the Melbourne Demons and the Hawthorn Hawks. Hawthorn is a suburb of Melbourne and is less than 4 miles away. Traditionally, people eat meat pies at these games, but I made do with a cream cheese and spinach roll. I always feel a bit anxious to go to big events like this by myself, but I’m so glad I went and experienced this very Australian tradition.

Since my last day in Melbourne was May 4th (aka Star Wars Day), I signed up on a whim to run a nighttime 5K Star Wars race. Run might be an exaggeration because I was quite sick and coughing, but it was fun to see so many folks dressed up in costumes in the middle of the night. I ran through foam, danced with Jawas in a silent disco, and marveled at the neon workups of famous characters.  The actor who played Chewbacca, Peter Mayhew, had just passed away so there was a lot of folks vying to take photos with all the Chewies on the run. I think there were more families and a greater diversity of body shapes than at any other race I’ve ever done. I also heard the most joyfully nerdy conversations while waiting in line to take photos at different stops. My favorite was a discussion of the average life expectancy for a wookiee. Answer: 400 years 🙂

stormtroopers at the start, Star Wars characters and me

SUPs and sloughs with my fellow water adventurer @pie_r_squared #standuppaddle #getoutside
This weekend was a bit jarring. 🤣🤣🤣
20 years after we started training for Peace Corps in Zimbabwe. We went through a lot in our training: 9/11, a murdered volunteer, and an evacuation. I am so grateful that all these years later, it feels like no time had passed. Old friends are the best. #zim13 #peacecorps #rpcv
Even though @turkmanor was my first friend in our complex and we hang out at each other's houses all the time and we've been play buddies for years, I have almost no photos of the two of us. I'm so grateful for his friendship and support and putting up with all my random stories. Also go see Song of Summer or get a video pass and watch it at home. We both loved it. #sfplayhouse #songofsummer
Pretty hazy out with all the smoke in the upper atmosphere, but still managed to find glimpses of the Milky Way. #getoutside
I'm not sure we knew exactly what we had signed up for, but the teamLab: Continuity exhibit was so joyful and mesmerizing. We sat in one room just watching for like 10 minutes before we had to leave because the museum was closing. #asianartmuseum #teamlabcontinuity
Loading Comments...