Madagascar lies about 250 miles from the African coast. In spite of being relatively close, there’s a clear difference between the people who live here and those that live on the continent itself. The prevailing understanding is that most Malagasies are descendants of a group of people that came over on the trade winds from Indonesia. Their language, looks, and customs all have much stronger similarities to other Indian Ocean dwellers than to the African continent. That being said, trade also occurred and continues to happen with the African coast, not to mention the French colonial influence. Most people here describe their country as a mix, a bunch of different groups of people who now share a national identity.

I wasn’t aware that silk was ever made from wild cocoons, but here in Madagascar there are a few workshops that do this. Although they also farm the cocoons, people still collect the cocoons from the forest that are left over after the silkworm metamorphizes into a moth. (This is different from farmed cocoons which are boiled with the silkworms still inside. This is so the cocoon is not disturbed and they can remove one long thread.) After the cocoons are collected, they are layered into balls and cooked in Malagasy soap which is made from zebu (beef) fat and ash. Then the cocoons are dried in the sun, spun into yarn, and then dyed using natural colorants (beet root, passion fruit leaves, etc.). The yarn is then woven into scarves and table runners and other products.

I also had a chance to visit a paper workshop, where the women must first mash up the fibers before spreading the thin pulp out on a screen to dry. The women in this cooperative add floral decorations to their creations which are all different and very creative.

fiber before being smashed in small bits, decorating the paper, final products drying in the sun

Near to the town is the beautiful private Anja Nature Reserve. My guide Adrian had spent the last 20 years creating the reserve and working with local people to protect the ring-tailed lemurs that live there. Ring-tailed lemurs are very charismatic and King Julien in the animated movie Madagascar made them famous. As with all lemurs, the women run everything in the family. They live in large family groups, so it’s fun to look up at a tree with a bunch of striped tails hanging down. They also like to climb up on the rocks to sleep and sun themselves in the morning when they get up. 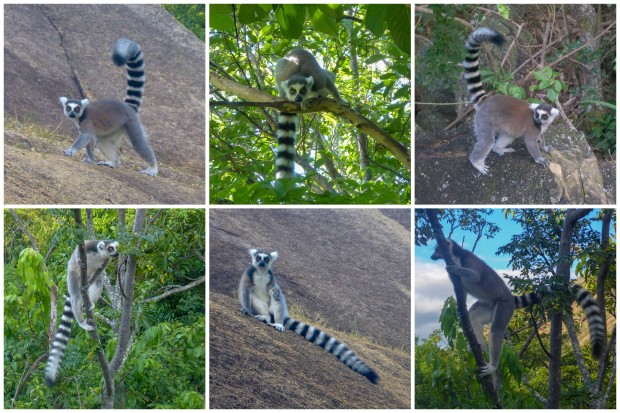 Although the park is famous for its lemurs, we also managed to find some other cool species, including one of the biggest, Furcifur oustaleti,  and one of the smallest chameleons, Brookesia brunoi.

The views from the reserve are also just amazing and absolutely spectacular.

Anja Reserve. This might be my favorite panorama I’ve ever taken.

Isalo National Park is one the most visited parks in Madagascar. The guidebooks all include photos of gray and red sandstone rocks, created by water long ago. They are nice to look at and make a nice hike in the morning, but the really beautiful parts of the park are the canyons nestled between those rocks.

view of the sandstone rocks

On the way, we did find some interesting life forms. Stare at the first photo and see how long it takes you to find the walking stick insect. The female is quite large and is actually mating in this photo with a much tinier male. The picture of the far right is of a plant called elephant foot. It looks kind of like a miniature baobab tree but isn’t actually related at all.

After walking down from the canyon plateau, we entered a wonderfully verdant canyon that has two waterfalls that enter into shimmering swimming holes. I spent quite a bit of time splashing around and swimming in the refreshingly cold waters.

On the way out of the park, there’s a campground where ring-tailed lemurs like to hang out. Since there’s a bunch of photos of them above, instead I’m adding a bunch of photos of the Verreaux’s sifaka. This one is actually a solitary lemur who was separated from her family during a fire a few years back. The rest of the family is deeper in the forest and she’s never found them, but instead hangs out near a family of ringtails. Verreaux’s sifaka is one of two lemurs that walks on two legs which has earned them the nickname the “dancing lemurs.” 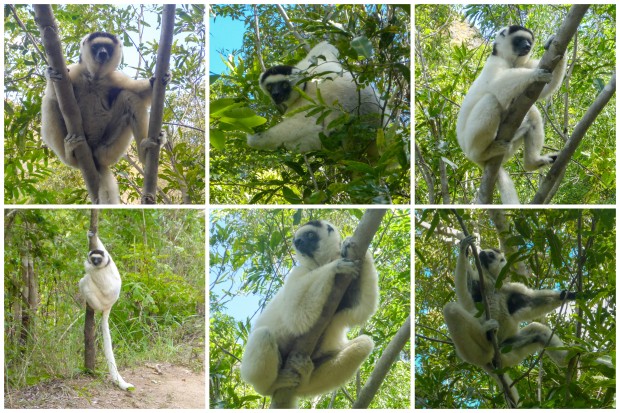 lots of pictures of one Verreaux’s sifaka

I only captured a short hop on film, but it’s easy to see the difference between them and the ring-tailed lemurs walking on all fours.

On the drive to Ifaty, the famous Malagasy baobab started to show up. These aren’t nearly as big as some of the baobabs I saw in Zimbabwe, but they are impressive. There are six different native species of baobabs on the island.

We also stopped at the Antosokay Arboretum near the town of Toliara. They had a remarkable array of plants from southwestern Madagascar, and I was absolutely struck by the number of them that had spines as a form of protection. 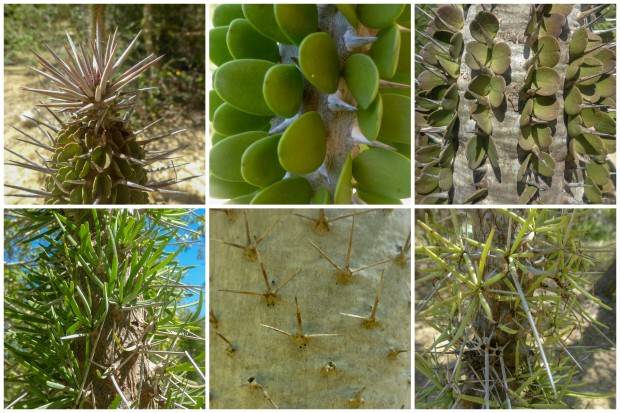 My driver left me at the beach on the western coast of Madagascar. I spent a lovely two days of hanging out, enjoying the sun and even a bit of snorkeling. Although the reefs aren’t nearly as stunning as other ones I’ve seen, I did manage to get a few good shots of the coral. Parts of the reef look really healthy, while other parts look extremely dead. 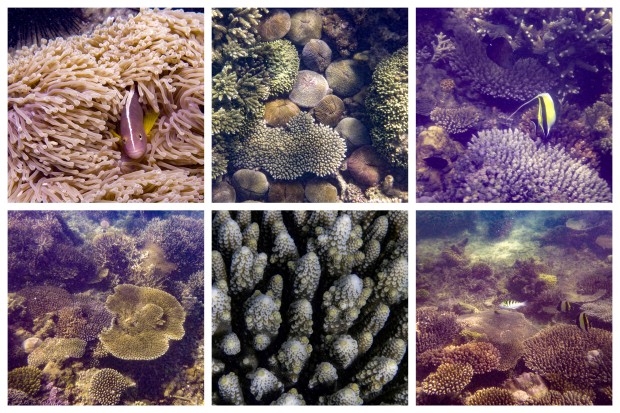 I just love the peacefulness of the photo below. It’s my current computer desktop background.

before entering Isalo National Park, the landscape completely flattened out

Welcome to the wonderful world of Madagascar, where nothing is poisonous and almost everything is different than anything you’ve ever seen before. I’m currently traveling in a way that I’ve never done before. Due to limited time and the rainy season, I hired a car and driver to take me around the island. I’m covering a lot of miles, but I am also getting to see a lot of beautiful creatures. It’s expensive and a little bit strange to not be stuck in the back of overcrowded mini vans, but I needed a change in my travel routine. As you might guess, this post is going to have way too many photos, because I did a terrible job trying to figure out what not to share.

This place just has tons and tons of awesome reptiles. I’ve forgotten most of their names, but they’re awesome and these are just a few of the many, many, many creatures there.

The coolest thing about chameleons are their tongues that can extend up to twice the length of their bodies. 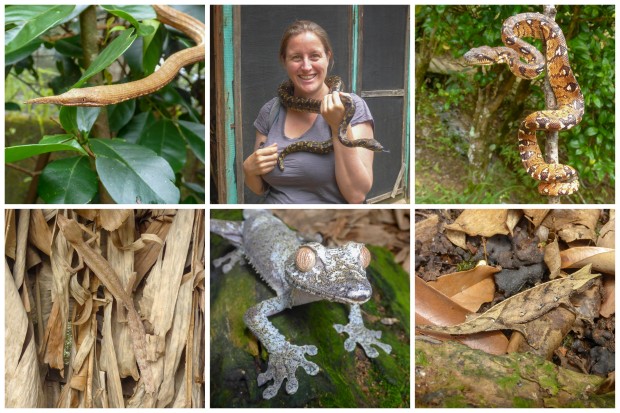 The same day, I walked through the rainforest in the night to see even more chameleons! They’re easier to spot at night because their eyes show up with a flashlight. I also managed to catch a shot of the elusive mouse lemur. This nocturnal animal is the smallest of all the lemurs and moves super quickly.

There were more hikes the following day and a visit to a Lemur Island, where lemurs that were formerly kept as pets are currently living out the rest of their days.

The landscape in Madagascar is ever changing. When it’s not raining, there are so many different shades of green and the sky lights up with a blue we never see in San Francisco.

Moving down National Road 7, I stopped in the middle of the rainforest. Most people come here to see lemurs and I definitely saw a few new species.

However, I was also absolutely entranced by all the other magnificent life we found in the forest. Because of their isolation, islands are factories for special animals and plants. After so many years away from their relatives, they turn into their own species with their own unique looks and behaviors. It is such an amazing feeling to take a casual walk and bump into things I’ve never seen before all the time. 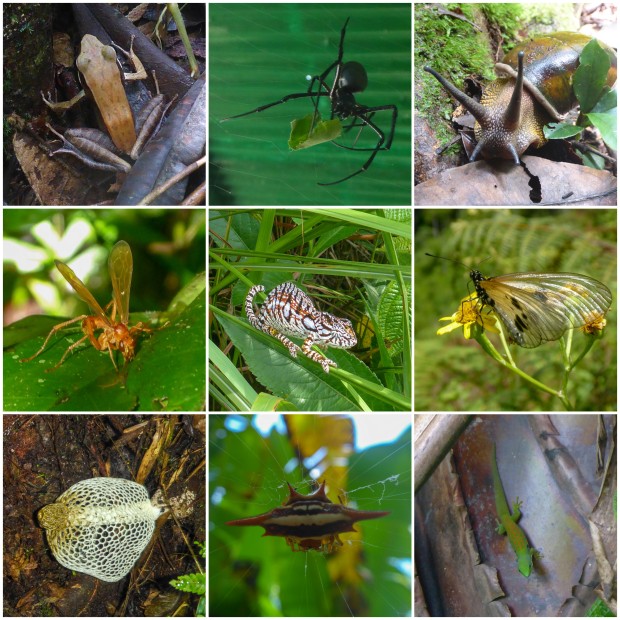 Ravenela is just a completely unique and crazy looking plant. It’s apparently related to banana trees but is called the traveler’s tree because it can provide anything a traveler needs. A traveler can make a house and everything they need to go inside it from the plant. Even water can be gotten from inside the stem. This is one of the national symbols of Madagascar!

I do want to point out the last photo on the bottom right. That’s a leech. When I first heard about Madagascar years ago, people told me that the rainforest was beautiful but that there were leeches everywhere. It made me extremely nervous to visit, even though I’ve wanted to see lemurs for years. A while back I visited my sister when she was living in Thailand and after a day of whitewater rafting, I looked down to see one of my toes was bleeding. There were some clear marks on my toe where a leech had attached itself, but it didn’t hurt at all.  Leeches may look really strange, but they don’t hurt at all. From that experience, I decided that leeches are way less annoying than mosquitoes. Ranomafana was the only place I’ve seen them so far. Our group stopped quite a few times to remove them from our clothing and our shoes. However, I walked for six hours and not a single one actually got any blood. 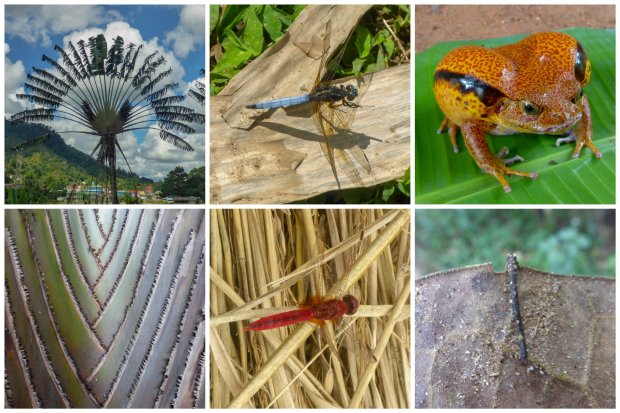 Vegetarian food is a bit hard to come by since almost everything is zebu (beef) or pork based. There’s a lot of rice and Western dishes served in hotels, but vegetarian Malagasy food is rare. The one dish I have had is ravitoto which is ground up cassava leaves (it’s usually served with meat). I also drank ranuapangu, water boiled with the burnt rice at the bottom of the pan which tastes exactly as you’d expect it to. The special soda here in Madagascar is called Bonbon Anglais and it tastes really similar to Inka Cola in Peru. 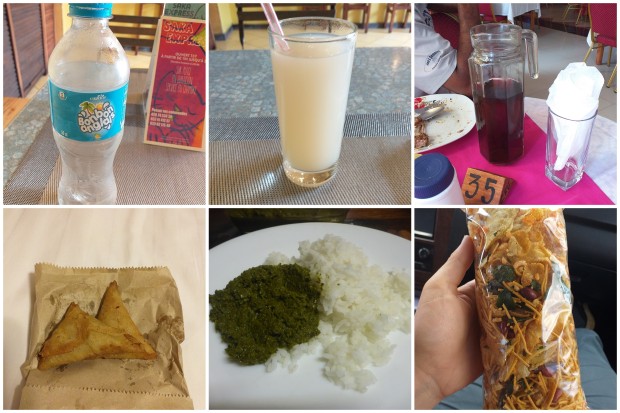