I’m on the road again for the spring semester. Here’s the map of my planned travels, but it is four and a half months of movement so things may change over time. 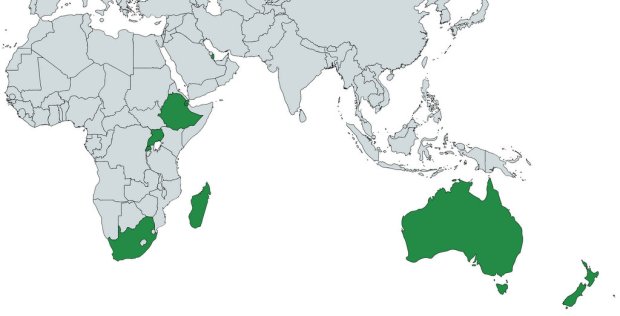 My first stop on this trip was a long layover (by design) in Doha, Qatar. It’s a tiny little country on the northern side of the Arabian Peninsula. You may have heard about it in the news, because a bunch of other countries cut ties with them awhile back for supporting terrorism. This BBC article is a good read on the subject.

Qatar is oil rich and only 88% of the people who live there are actually Qatari. It’s a nation of immigrants, and walking down the streets you are as likely to hear Tagalog and Hindi as you are to hear Arabic. Immigrants are imported to do all the jobs that Qataris don’t want – waiters, fishermen, maids, nannies, construction workers, even tour guides! English becomes the lingua franca because so many people are from somewhere else.

After landing at the airport, I hopped on a bus into the city and walked along the beautiful La Corniche since it was still quite early in the morning and nothing much was open. There’s a huge developed skyline across the water that contrasts intensely with the old dhow fishing boats lined up along the harbor.

dhow on the harbor, view of the skyline, the Pearl monument

One of the highlights of Doha is the spectacular Museum of Islamic Art, which is a collection of art from the Muslim world, stretching from China to Spain. Because of Islam’s prohibition on representing figures in religious artifacts, geometric patterns feature prominently in the work. Muslim artists were not only fabulous artisans, they were also mathematical geniuses. I particularly enjoyed seeing how a tessellated shape can be entirely transformed when crafted in different styles of woodwork.

Can you see the same pattern in all of these?

The room where I spent quite a bit of time was the one showcasing art and science. (Imagine that. Ha ha.) Astronomy was a huge source of interest for Muslim scholars, partially because prayers that occur five times each day are set according to the rising and setting of the sun. After collecting years of data and making observations, Muslim scientists had some deeper understandings of the universe than many others around the same time. I just saw this decolonizing infographic showing how so much of what they knew was “discovered” by later Europeans.

astrolabe used for calculating latitude, a description and model for how eclipses occur, celestial globe of constellations

For being a huge city, I was surprised by how many animals were hanging out in the area. There’s a random pen of very unhappy camels right off the main road and a huge stable filled with Arabian horses. In addition, there are rows of shops filled with falcons for sale since using them to hunt other animals is a tradition among Qataris. Falcons cost anywhere from $1,500 to $15,000, which explains the need for the falcon hospital nearby.

camel in the middle of the city, falcon (with eyes covered) in the falcon souq, Arabian horse

Some folks have requested more food photos this time around, so I’ll do my best to provide. For breakfast I had giant Yemeni bread with beans and a spicy cheese sauce, chased down by sweet milk tea. I picked this restaurant solely on how delicious the food looked when I walked by and I was right. The guy who ran the restaurant was so happy that I spoke some Arabic. I learned the Darija dialect when I lived in Morocco, but Gulf Arabic is quite different, so I needed to look up some words. As I was leaving, I heard people speaking Spanish and after finding out they were from Peru, Argentina and Chile, we talked for a short time in Spanish about my recent travels. Then I went to the counter and told the man how delicious the food was and how full I was in Arabic. It was a strange small-world polyglot moment.

One last photo of the beautiful skyline from the outdoor patio at the Museum of Islamic Art.

After Doha, I headed to Addis Ababa in Ethiopia. Internet has been a bit challenging here and my phone was stolen (again!). Apparently it has become a right of passage for me to lose my phone the first week I embark on a long journey. Fortunately, the rest of my time here has been great so far. My photos weren’t backed up, so my fabulous museum and church visits from the past few days are not visually documented. I’m safe and happy and having a wonderful time!

SUPs and sloughs with my fellow water adventurer @pie_r_squared #standuppaddle #getoutside
This weekend was a bit jarring. 🤣🤣🤣
20 years after we started training for Peace Corps in Zimbabwe. We went through a lot in our training: 9/11, a murdered volunteer, and an evacuation. I am so grateful that all these years later, it feels like no time had passed. Old friends are the best. #zim13 #peacecorps #rpcv
Even though @turkmanor was my first friend in our complex and we hang out at each other's houses all the time and we've been play buddies for years, I have almost no photos of the two of us. I'm so grateful for his friendship and support and putting up with all my random stories. Also go see Song of Summer or get a video pass and watch it at home. We both loved it. #sfplayhouse #songofsummer
Pretty hazy out with all the smoke in the upper atmosphere, but still managed to find glimpses of the Milky Way. #getoutside
I'm not sure we knew exactly what we had signed up for, but the teamLab: Continuity exhibit was so joyful and mesmerizing. We sat in one room just watching for like 10 minutes before we had to leave because the museum was closing. #asianartmuseum #teamlabcontinuity
Loading Comments...